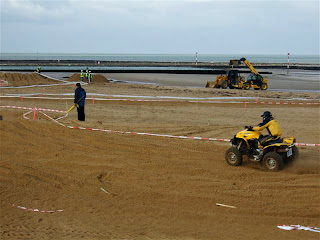 Over the beach at Margate today for the Quad bike races.

Given the heavy rain until noon, we didn't expect it to happen but the blue sky started to break through just in time for us to join a Boeing 747 doing practise circuits at Manston, the Jumbo going one way and us the other way, with a 1000 feet of separation over the Thanet beaches.
In fact, we were supposed to be on the same detail on Saturday but strong crosswinds made it impossible to pick up the banner for Terence Painter Properties, the sponsor and after several attempts, we had to concede victory to February weather; the first time in twelve months that the conditions have beaten us. It does happen and clients don't often realise that if conditions aren't right, picking-up their banner in strong winds and turbulence can be very awkward, if the aircraft won't stay exactly on line in the vital last seconds.
Recently we had one helpful onlooker trying to call me on her mobile phone. Afterwards, she commented that she thought we might have a "hands-free" facility, "Like in the car" and could carry on a conversation during the approach attempt. The reality in a light aircraft diving towards a small target on the ground at 100mph is rather different as I'm sure you can imagine.
No comments:

All aboard for the"Big Sky" Quad-bike races on Margate beach this weekend and estate agent, Terence Painter Properties have asked Airads to fly their banner over the event, advertising their new line in Spanish homes - Call 01843 830334 if you are interested - .

The weather forecast isn't great but as the event is close to home - walking distance - we have a better chance than most of finding a gap and taking some good photographs too.

Meanwhile our new aircraft for the 2007 season has arrived in Waco, Texas, from its previous home in Alabama, next stop UK.
No comments:

We've had three enquiries this month - maybe from the same source - from people asking us to supply a banner only and not an aircraft, so for clarification, let's walk through the implications for anyone who hasn't given it much thought.

Someone has a friend with an aircraft who has offered to tow a banner of any size for a large public event. The friendly pilot may not have the right equipment, certified by the CAA on the aircraft or perhaps they have inherited it. The pilot may never have attempted flying a banner before either but "Hey" it looks easy and he will give it a go even though the aircraft may not be carrying the required insurance.

Now, if we were to make-up and lend a simple letter banner to a non-operator, we don't know if the unknown pilot would either attach it properly to the aircraft or fly it correctly. The potential liability implications for us in providing the banner would be horrendous if it were to become detached.

Best then to hire the banner and the aircraft from the same source and preferably one of the small handful of professional operators in the UK that can offer trained and experienced pilots and insurance. Aviation is not forgiving of shortcuts where safety is involved and it is safety and professionalism that remain our two principal concerns in providing an ublemished record of service across the UK
No comments:

Corona Beer have been quick off the mark this year, booking Brands Hatch for August and this time, the British Superbikes Championship at Silverstone in May.

Corona already have one of the largest sheet banners in storage with us and this makes it easier for clients to call-up and book an event well in advance, knowing that all Airads has to do is to load the skybanner and fly to the nearest set-up airfield to make the display.

Meanwhile, Meridian News have asked if they can film "A day in the life" of well, us, following several clients in a single day's flying in the south east. We need to find a day when everything is fairly concentrated and most likely in early summer before the volume of work makes it possible to film.
No comments:

Felt a little like the legendary pony express, trying to get through the bad weather for a "Happy Birthday" banner over Henley today.

It was down to 600 feet when we passed Biggin Hill on the way to set-up at Brimpton, just outside Aldermaston but fortunately, the cloud lifted enough for us to find the centre of Henley for a birthday surprise banner, organised by a lady for her partner over a restuarant in the town.

The way home left us in the cloud from Epsom all the way into the instrument approach at Manston, admirably handled by Suzy B. on her first flight with us. "It doesn't get much worse than this", I told her but at least the client has texted us with the message, "Thank U very much, fly back safe, love E.!

A good result amid a bad week of winter weather.
No comments:

In the Murk over Kemble

Low cloud and fog prevented us displaying over Swindon for B&Q today.

While the weather is the south-east of the country, as far as High Wycombe was like a Spring day, with bright sunshine, to the West, the clouds rolled in leaving Kemble under a 700 foot ceiling and as low as 200 feet at Lynham by late afternoon.

We did our very best to make it all happen, descending through the cloud to Kemble to wait an hour to see if there was any improvement but it was not to be and we had to leave and climb back above the murk again towards London and Manston an hour later.

Better luck tomorrow perhaps with a birthday banner over Henley Upon Thames.
No comments:

One More Aircraft for Summer 2007 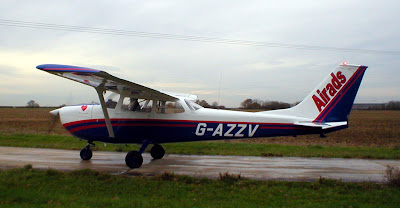 Airads has today bought another aircraft to meet the anticipated demand from clients over the coming season. This is a second Cessna 172 - coming over from Alabama - but with a more powerful engine and long-range fuel tanks and will most likely be based at Rochester airport in Kent.

Valentine's Day was a "washout" this year with every airfield in the south-east shut, which is sad for the special messages that were booked on the day. We're attempting to move these onto the weekend for the clients who still wish to fly them.

This weekend you'll see us again over Swindon Town for B&Q - weather permitting - and on Sunday lunchtime over Henley town centre, with a "special" message to a lucky man from his girlfriend.

Welcome to new pilot Suzie Bazire, who joins, the legendary Captain "Bob" Shilling, James Bertram, me as Ops Director and our Chief Pilot John Waller, on the regular team this weekend.
No comments:

Up & Up with Invicta 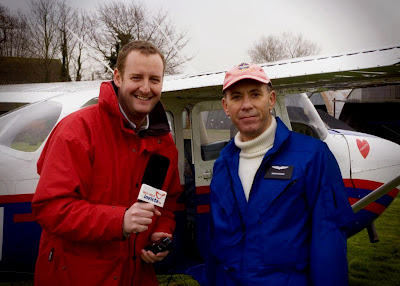 If you are vaguely interested, here's the link to this morning's Invicta FM breakfast show with the Myspace.com aerial banner stunt above Herne Bay and Canterbury involving James Hemmings.

Apparently, AudioBlogger is no more and I have had to use Mypodcast.com to upload the file, which has an irritating advertising message before the clip starts.
No comments:

On Air with Invicta FM 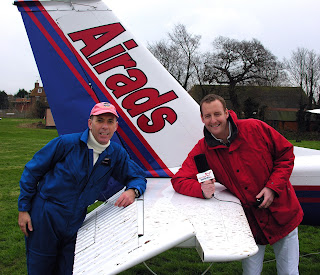 We didn't think that the weather would be good enough but we just staggered into the air over Canterbury and North Kent with Invicta FM's James Hemming to record part of his show "on air", quite literally.

With James in the right seat with a microphone and a live connection to the studio, I think the pick-up was an eye-opener for him and I warned him to "squeeze" as we pulled up tight to collect his banner with its myspace address for his personal Myspace website; part of a competition he's running with fellow DJ, "Ali".

Congratulation to Sarah Fellows who won the banner competion on Meridian News!

Swindon tomorrow for B&Q again if the weather holds and then a busy schedule into Valentine's Day next week.
No comments:

If you watch Meridian News from Monday of next week, they are scheduling a Valentine's Day phone-in competition, with an aerial banner flown by "you know who" over the love of the lucky winner.

Next week, we are also doing another "gig" with Invicta FM, taking DJ James Hemming of "James and Ali in the Morning" fame up for a ride, with a banner promoting the show. I don't think he quite realises what he's in for one we pull out of the dive to pick up his banner which says "www.invictafm.com/myspacejames". I hope he likes extreme roller-coaster rides! 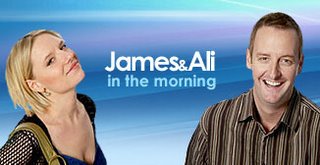