We did have some last minute issues with the police attempting to prevent the flight after complaints from the rival fans but in the end, it all went ahead without a hitch and from the look of Twitter, to some amusement by both sides.

The weather deteriorated badly as the flight progressed and it was only luck that the aircraft managed to get to Pride Park before it closed in.

As one might expect, lots of good media coverage for the flight. 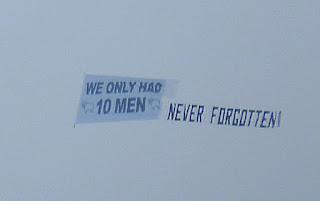 Airads were in action once again this afternoon for football fans and it was over Elwood Park with a message for the Blackburn Rovers manager, Steve Kean
The plane circled Ewood during the first half of the match against Chelsea, with the message - reading simply 'Steve Kean Out' - bumping along behind it. 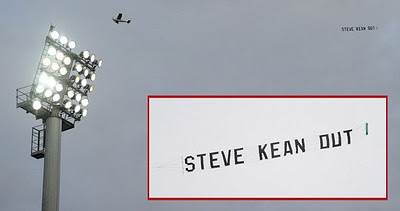 We were delayed for a quarter of an hour by a bird strike en-route, described by some as 'Fowl Play' but all credit to Peter, the pilot for getting it there and back without incident.

There's been considerable coverage online and it has appeared on the TV sports reviews.
No comments: