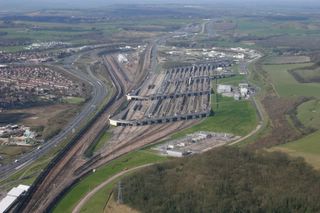 Eurotunnel Cheriton, under pressure in recent weeks to keep up with the extra work load imposed by the closeure of a ferry berth at Calais. not helped by the french port authority strike, will the poor lorry drivers ever escape operation stack!. see more pictures at www.airadsimages.com

A proposal of marriage and a desperate escape by two rough-looking characters, disguised as pilots, from Teeside airport. A long flight to Edinburgh and East Fortune airfield today to tow a marriage proposal for the lucky Anne Gilchrist, watched closely by a BBC Scotland film crew as her boyfriend proposed, with a little help from Captain Romantic and an Airads banner.

While Kent at 07:30 am was locked in ice and snow and we took off into a blizzard, Scotland basked in bright sunshine and you can see all the day's photos if you "click" on the image attached.

Back home to Maypole via Teeside for a refueling stop. Having parked next to all the other aircraft, filled-up and then wandered into the terminal with our bright yellow jackets, getting back out to the aircraft again, even as aircrew, wasn't that easy, as security viewed us with some suspicion and searched us thoroughly.

Claiming to have an aircraft parked outside next to the KLM "City Hopper" wasn't much use. However "Osama Bin Shilling" and I finally managed to persuade them to let us back airside and we finally escaped from Teeside without being placed under house arrest.

Back in Kent, it's freezing cold the ice on the airstrip is thawing into sticky mud. The Costa Del Scotland is much more pleasant a destination this weekend.