The latest TV advertisement for 'First4Lawyers' made its debut appearance this week and so that means Airads now has two ads running on TV at the same time with plane banners. The first is of course the latest Go Compare installment, filmed with two aircraft but you can see the result below on YouTube. 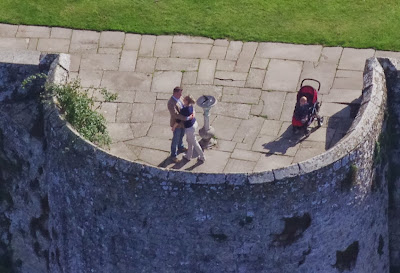 A very Polish proposal at Leeds Castle in Kent today. Andrzej's flying proposal to Iwona. It all worked out in the end despite the thick fog at first.

The day started with fog down to 100 feet but with luck, it lifted just in time for Andrzej to "Pop the question."

The new telephoto lens at just under £1,000 makes a huge difference from a 1,000 feet and almost 100 mph trying to capture the moment.

United States Airforce F15 fighters photographed while passing over the Lakenheath airforce base in Norfolk. Possibly more operational military aircraft below than the entire RAF on any one day?

You wouldn't realise how long we were orbiting from the film and in fact the letters were red. However, it's amazing what a little post-production CGI can do these days.