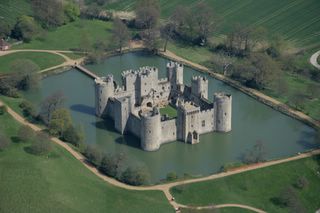 Bodiam castle built in 1385 by Sir Edward Dalyngrygge, the castle has a broad moat with a square fortress.The castle fell to parliamentry forces in the civil war. For centuries it lay in ruin after the owners were ordered to dismantle it. Bought in 1917 by Lord Curzon who spent a considerable fortune restoring it to its present day splendor. See more great aerial photos at www.airadsimages.com or commission us from as little as £45.

An interesting excursion along the South-coast to Bracklesham Bay yesterday to tow a promotional banner for a customer near Bognor. The BBQ detector on the front of the aircraft quickly identified a very small grass strip in the area , the home of the Bracklesham Bay Microlight Flying Club that we dropped into, run by Roger and Sue, who were busy setting-up the club's Sunday lunchtime BBQ. 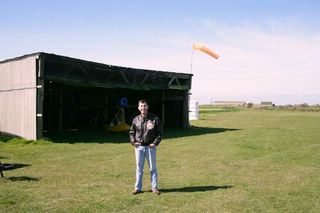 Hidden between two fields, a caravan a hangar and a windsock

While Captain Bob took their excited teenage daughter Ella for a ride, I stayed on taking photos, with Bob's new digital camera, which weighs more than the aircraft! 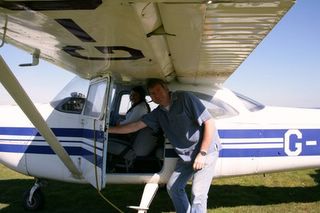 If you're looking for Bracklesham Bay on a weekend, head towards the Isle of Wight from Bognor but wait until you smell cooking sausages, just before you run out of land. You'll be very close.

From Bracklesham, we followed the south coast at low level taking aerial photos before turning inland beyond Brighton toward Rochester to refuel. Then it was of towards another private strip near Andrewsfield in Essex to tow a wedding banner over a reception in a small village, before returning, and embarking on a photo shoot of the bigger London football grounds. 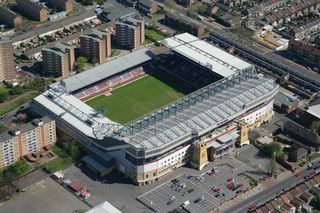 We had hoped to sneak in towards Tower Bridge for the Marathon but the London City controller wouldn't let us along the river and with a police helicopter hovering above Docklands, we took the hint and moved-off towards Croydon and the Crystal Place ground before working our way back along the M25 toward Biggin Hill and then Rochester.

In contrast with today's pouring rain, Sping had definitely arrived on Sunday with great visibility. But that's Britain for you. One day it's Summer and then it's back to wet Winter weather again.
No comments:

A Year in Photos

You can find an Internet slideshow of a year in photos of Airads banner-towing adventures and activities around the UK by following this LINK. 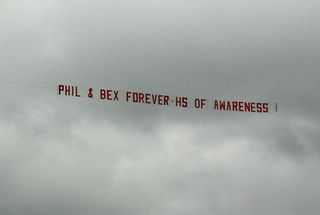 Airads delivers a special message over the wedding of Phil and Bex. Good luck to the happy couple. 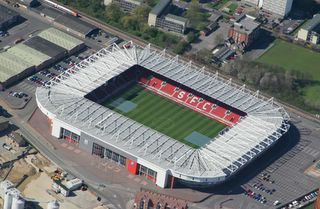 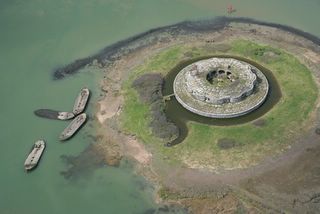 One of the wartime coastal defence forts sitting in the mouth of the river Medway, now in ruins. see more images at www.airadsimages.com