We had to do Chelsea vs Manchester United this afternoon. A message from Jose Mourinho, "Goodbye and thanks for all the fish", might have been interesting in the circumstances but he didn't ask.

Come tomorrow, it's the Labour Conference and I can certainly think of a different message than one asking the Prime Minister to support small business. "Vote Tony - Get Gordon" springs to mind!
No comments:

On Season - Out of Season

Almost forgot to post any updates! As this is an occasional diary, we only do it from time to time when our feet our on the ground.

We had the TUC conference and two London Premier League football matches last week, today, there's a flight for a night club over Liverpool and over next weekend, we are in the north for two more Premier football matches for a client.

Add to this, the Labour Party conference in Bournemouth on Monday and the Conservative Party conference in Blackpool - I wonder why nobody wants the LibDems?) and you can see that even with the season ended we are quite busy; Battle of Britain day last Sunday and an EU protest march this weekend too!

While aircraft advertising peaks in August, as you might expect, it still works well at other times of the year if the focus is correct and the weather is good; football and party conferences being two excellent examples. And there's still all the weddings and marriage proposals too!
No comments:

A Message for Gordon Brown 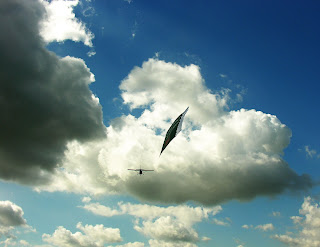 "Return Metro to Public Ownership" said the message and it was delivered, as promised to Gordon Brown, this afternoon as he arrived at the Trade Union Congress. Couldn't get a better photo from the outside but perhaps the TV news cameras picked it up along Brighton seafront? I could see them swivelling in our direction as we passed the convention centre.
No comments:

A Surprise for Gordon 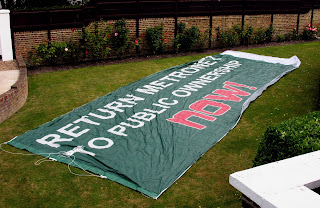 With the Trade Union Congress taking place in Brighton next week, pictured here is a potential surprise message from the Union, waiting for Prime Minister, Gordon Brown, to arrive at 'Congress'.

Keep it a secret though!
No comments:

Described as the "Special 192.com spy plane", high-resolution photographs from both the Leeds and Reading festivals can be found here. Now that was a long day's flying, mapping both festivals!
No comments: 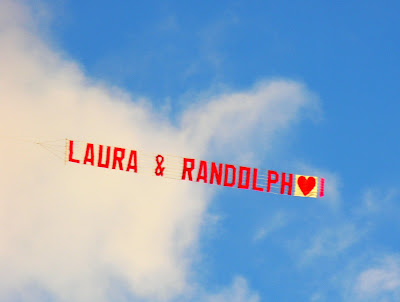 Over the Pegwell Bay Hotel in Ramsgate this evening to help celebrate a wedding reception taking place there. My best wishes to Laura & Randolph on their marriage and for the future ahead.

I was planning to tie the banner to the Oasis 747 yesterday but I couldn't find a suitable attachment point!
No comments: