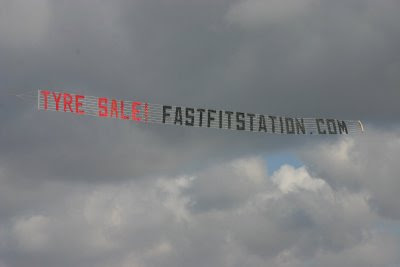 The return to what has become a regular fixture, this weekend, the annual 'FastFit Station Tyre Sale' at Milton Keynes.

In fact, we were very lucky to get the flights in on Saturday as the weather on the days either side was simply dreadful. We had been booked for two days but had to double up on the one as both our operating base airfields were badly flooded at Rochester and Maypole. It took two attempts on a semi-frozen grass surface to get airborne from the latter, off pass North London towards Turweston, where we flew the Milton Keynes banner from, on what became a glorious winter's day, in the short interval between two extreme Atlantic weather fronts.

The aircraft is presently back at Manston in Kent with its hard runway surface and tied-down against today's gales. If I had attempted to land at Maypole I suspect I might still be stuck in a vey large puddle on the runway.
No comments: 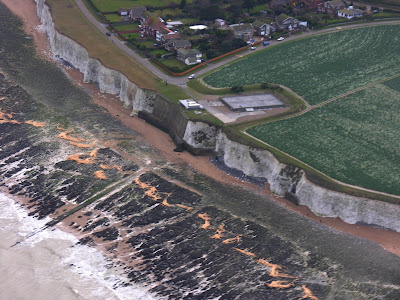 One Photo of the wood washed ashore at Ramsgate for the papers this afternoon. (photo is copyright) but I thought readers might like to see the results. The weather broke sufficiently for a flight just before sunset and so the image clarity isn't as good as I would like.

The timber, which came from the cargo ship Sinegorsk in the English Channel, began washing ashore on beaches around Ramsgate and Broadstairs following the strong southerly winds overnight.
No comments: