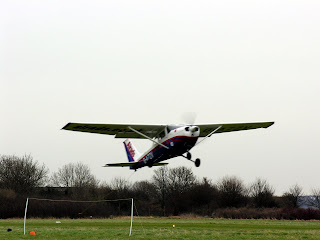 On the wild side out there this afternoon but divine providence helped one young lady from Germany propose to her boyfriend at Bluewater a little earlier, although I had told her that the chances of getting a banner overhead were slim.

It's not much fun when it gets that turbulent and the temptation is to simply say "No" than give it a try but miracles sometimes happen and I hope they'll both be very happy together!

You'll see how close we have to work to the ground in this picture from this afternoon.
No comments: 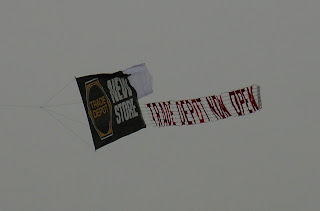 Two flights out of Rochester today, bringing the legendary 'Captain Bob' out of self imposed retirement to fly a banner for Trade Depot to announce the opening of their Croydon store.

Since 'Captain Bob' decided to start flying a Bell Jet Ranger helicopter, with its leather fitttings and generous mini bar, fixed wing aircraft have become a little passe but the old skills were very much in evidence, with a neat pick-up and an even neater drop, right between the posts.

The day started 'Murky' and didn't really improve that match. Much of North Croydon had a fog bank sitting neatly over the top of it and so we had to be a little imaginative moving around the outskirts and the M25 to avoid it. Hopefully, the visibility will be a little better tomorrow.

Here's a quick video of the return to Rochester airport. 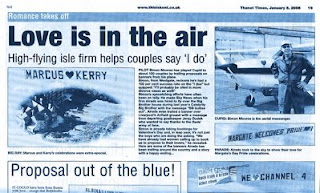 Friday may be busy. The weather forecast is not good though!
No comments:

Very tricky weather today but sterling work from John W. ensured that Richard's proposal to Hannah arrived in time at Southend pier for 3pm, where she was waiting for an unexpected surprise.

Not exactly the finest weather to be out on the pier, drizzle and low cloud but like the fabled "Pony Express" Airads managed to get there and the girl said "Yes". Another succesful marriage proposal to add to our 100% record!

I've attached a short YouTube video. It's not great as I only had my little camera with me and the light was very poor. Hope you can see the major details though!

Trading Up Over Croydon

Trade Depot has selected AIRADS to publicise the opening of its new store in Croydon at the beginning of March.

To support the flights, the company is having a "Split" digital sheet banner designed, which can of course be used for other stores and messages if required. The banner involved allows interchangeable 5' letters to be attached to the end to give greater flexibility for different messages.
No comments: