Say "Marry Me" in Turkish 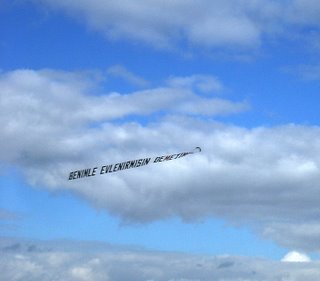 One more successful marriage proposal this week with two more ahead to do over the coming weekend. We have never tried writing "Will you marry me" in Turkish before and it almost ran us out of the letter "M", which appears to be very common in the Turkish language.

And again the banner method of asking for a lady's hand in marriage worked without a hitch. Even in Turkish!
No comments:

Gap in the Weather 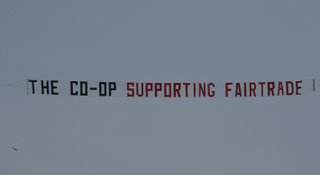 We finally managed to struggle into the air today to display the Co-Op “Fair Trade” banner from Rochester, all the way to Herne Bay and Canterbury.

The weather in the last week had made it impossible to get off the ground but some unexpected sunlight and high pressure gave us a perfect day for the display which rolled around the town centres and the University of Kent at Canterbury.
No comments:

Having finally managed to put the video online, it's a huge upload, Airads junior co-pilot, Charlotte Moores shows BBC South East Tonight that flying isn't simply for the birds. 7/10 for the landing but then she can't really see over the instrument panel too well! 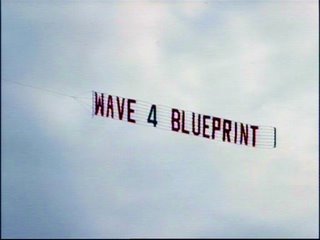 Supported by an Airads display banner, an art exhibition with contributions from children at 30 schools across Kent has opened at a gallery in Folkestone.

It is the culmination of a year-long project in which children were asked to work on the theme of communication.

Subjects represented at the Metropole Galleries range from the carrier pigeons from the two World Wars to modern mobile phones.

The comunik8 exhibition, which opened on Saturday, was launched with an aeroplane fly-past off Folkestone.

Hundreds of children watched the flypast on Friday off the cliffs in the town.

The exhibition organisers said they were delighted by how much artwork was submitted.