A Day at The Shard 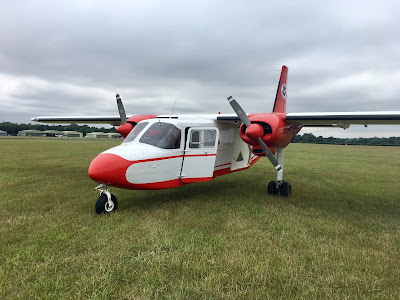 One of those days in a lifetime to remember.

Today, I had to fly a banner around London’s iconic landmark, The Shard.
The occasion was a marriage ceremony at the top of the building. Sonya and Paul were having their big day, courtesy of the ITV, ‘This Morning’ programme, and I had to cap-it-off with a large programme logo, followed by a ‘Just married’ message with a large red heart, at exactly 12:18.
The public and clients really don’t understand what a significant challenge placing an aircraft over central London involves. Why would they?
Other than the simple logistics of the aircraft - it has to be a twin-engine - crew and ground crew, one has to gain the permission of NATS at Swanwick, Heathrow, Special Branch and quite possibly even the Archbishop of Westminster. London is now an intense security space and the authorities are somewhat ‘twitchy’ at the thought of any non-scheduled aviation activity inside it’s tightly policed borders. 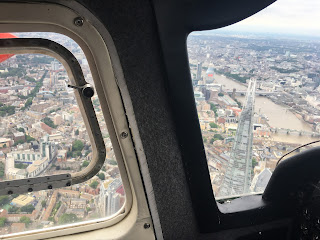 Bringing the plan together, involved borrowing the Islander BN2 from Headcorn Parachute Club, which is the only banner-towing equipped ‘Twin’ in the country, my friend and pilot, Richard, ‘Polly’ Parrott and another friend and pilot, John Waller as ground crew; a vital part of the operation in making sure we pick-up the banner in the first place and get to the target in time.
The circus, in two aircraft, arrived at Denham airfield, outside Uxbridge, at 10am and from there we set-out the banner on the grass and then waited for 11:30 to come around, at which point, ‘Polly’ and I departed into the airfield circuit and trawled the line, attached to the banner, strung between two posts, ten feet off the ground.
With lots of time to spare, we trundled off to an area North of Alexandra Palace, the official entry route into central London, received our clearance from Heathrow ‘Special’ and then went into a series of orbits until exactly six minutes past twelve, when we were cleared to enter the London control zone, with a direct route to the Millennium Eye wheel and Westminster, over the bridge and onto the South Bank of the Thames. 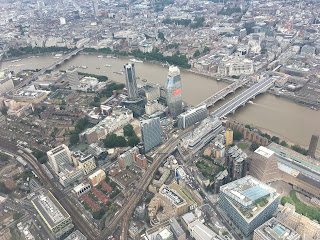 Arriving on the South bank, we did one orbit to bleed off some time and then headed straight to The Shard, you can’t miss it, and proceeded to orbit it for a good ten minutes before retracing our steps, out of London and back to where we started at Denham for a coffee and a nervous breakdown.
It’s hard enough to fly a banner with a single engine aircraft - see video - with a big heavy twin-engined tractor like the Islander, it’s much much more complicated, which is why, I assume, nobody else on the planet I know of, is actually crazy enough to try it.
Now we have been seen over London on a number of occasions; Wembley, twice for the FA Cup semi-finals, I’m expecting much more demand. However, the biggest challenge of all remains the management of client expectations, in that one simply doesn’t ‘Troll’ a banner over London without a huge level of scrutiny and preparations. Like most things in life, it’s simply not as easy as it might look
No comments: