Sunday morning and a bit of a challenge, with a telephone call from Abu Dhabi. Apparently, the ruler of this wealthy state wants a special banner flown for him this week, to celebrate his son's birthday but while we are delighted to have been approached, as the most visible operation outside the United States, the logistics required present an enormous challenge, even with our partner banner operation now operating in Dubai.

The impossible we can achieve but miracles can present us with a real challenge!
No comments: 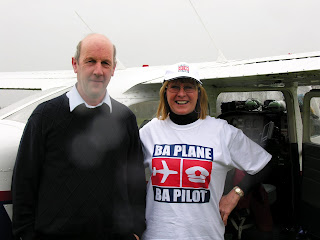 Despite pretty daunting conditions this morning, with fog and low cloud, we decided to "have a go" at getting to Brimpton airfield just north of Farnborough, to launch the BALPA banner to support the British Airways pilots union march at Heathrow today. (see BBC)

Departing in minimal visibility, we were in the cloud past Rochester and pretty much until Ockham, remaining "VFR on top" at 2000 feet but found, to our surprise as we passed Blackbushe that the weather, although not great, looked good enough for the flight.

While one of us filmed, AIRADS Chief Pilot, John Waller, took BALPA's Head of Flight Safety, Carolyn Evans, along as co-pilot. (Pictured) Off first towards Reading and then with the approval and control of Heathrow ATC, along the M4 towards Slough and the Burnham beacon. 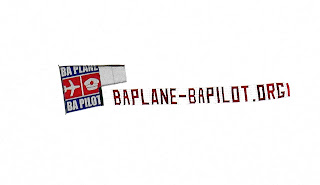 By then the rain had started and the cloudbase was starting to fall but John, as you can see from the video, bought back a very wet and "draggy" banner to drop at Brimpton without mishap.

It was raining so hard, I couldn't get any decent photos! Because the background was so dull, the banner photo is colour enhanced which is why you can see the smaller tail-flag 'parachute' - actually a different colour which normally goes unnoticed - at the end of the banner. Otherwise it wouldn't fly horizontal!

I'm looking forward to getting a souvenir T-shirt!

Footnote: A warm welcome to all the BALPA members from all around the globe that are visiting this website in large numbers from Cape Town to Tokyo - from looking at the traffic log - . If you don't have the Adobe Flash Player installed on your PC, you won't be able to see the You Tube video. Flash Player is easily downloadable but on some public PCs it's either not installed of turned-off with the Active-X controls for security purposes.
No comments:

As today's strong winds have put a stop to any flying work I had, I've been having a quick look through some of my videos and remembered this one, that I took of Spitfire U2. Corgi even produced a special collector's edition scale model of the same aircraft that I have on the shelf in front of me.

Thanks to the wonders of YouTube, I can now share this short clip with any Spitfire fans or history enthusiasts.

The rain that day was so bad that the fresh blue paint on the Spitfire started to wash off!