Hull's Tigers Promoted with an Airads Banner from KAROO

A dramatic flight for a client over the city of Hull this afternoon, with the message: "CONGRATULATIONS CITY FROM KAROO" as the population celebrated their promotion to the Premier League. (see newspaper report)

Around 50,000 fans squeezed into Queen Victoria Square and from above the streets appeared packed, all the way from the football ground.

The flight itself was a matter of luck. The strong wind conditions were arguably 'out of bounds' but fortune smiled on the attempt and the banner was airborne on time.
No comments: 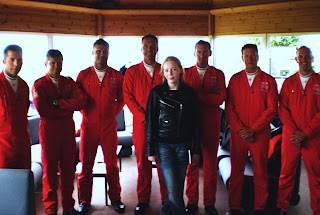 Not a great Bank Holiday weekend. Two days work in Skegness postponed until July and a Saturday wedding in Kent, 'Blown away' by the strong winds. It's always annoying when the 'Great British Summer' starts playing its tricks but let's hope that June wll live up to expectations and that July won't be an unhappy repeat of 2007, with its constant rain and flooding in the South West.

With no scheduled flights on for Airads today, the youngest member of our team, thirteen-year old Charlotte, managed to persuade the Red Arrows to sign her logbook at Manston today. As she's been flying with her father since the tender age of seven, she's planning on a career in aviation and from the photograph, she's obviously making the right friends!
No comments:

No flying today, far too windy and lucky that nothing was booked. We have one aircraft out for its annual service until at least Saturday and the second rapidly running out of working hours until it's own 'Annual' in two weeks.

As these are working aircraft, they are subject to 50 hour servicing and a complete annual maintenance regime every twelve months. Very expensive and they never work out to suit the schedule. Once you reach 50 hours, that's it. Everything stops until the full maintenance check has been done at an authorised engineering facility; and you can't just roll-up like QuickFit!

As there's no flying, I've been playing with the video editing software again; I don't get much chance to experiment. So here's our entry for the 2008 Cannes Film Festival.

Seriously though, we were asked by a client if we could fly the event but French 'Red Tape' stood in the way, which is ironic, in a way, as both my grandparents were big 'Stars' of the pre-war French cinema and one is buried there.

Radio One - A Really 'Big Weekend' with Airads 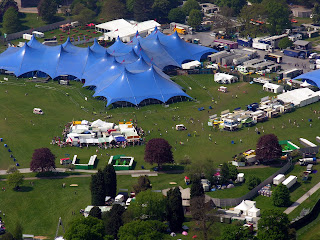 Two aircraft up simultaneously for several hours above the Radio One 'Big Weekend' today at Mote Park in Maidstone, both promoting different music events for a client.

We are back again on Sunday morning and lunchtime and I hope to be able to put together a short, 'YouTube' video for people to watch.

In the meantime, here's a link to all today's aerial photos of the event, taken as we circled it. The weather was great! 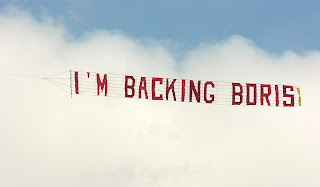 A frantic rush to an airfield on the Eastern edge of London this morning in time to fly a banner supporting Boris Johnson's campaign for Mayor, today being the big day of the London and local elections.

The thunderstorms presented a bit of a problem, very unusual so early in the day but we got there, flew the banner and hopefully had the photos back in time to meet the Eveing Standard's deadline.