Along for the Ride

One way to spend the weekend I guess, which reminds me, I have to have the aircraft painted in new AIRADS house colours next week. Should look nice when it's finished but given the cost, it had better be!

Interesting day at Rochester on Friday, with the airport turned into a filmset and closed to visiting traffic. They were busy making a film called "Surveillance", starring Simon Callow and others, where the plot involved stealing an aircraft in an attempt to leave the country.

Lot's of takes and 'derring-do' aerial chases, the internet and all that I'm sure, so I won't spoil it for you. It's due to be screened at next year's Cannes Film Festival.

I rather wondered, from this one and the Ridley Scott production we were roped into in June, where actress Keira Knightly was cast as as a lost pilot, how on earth they ever get these films finished, as so much time appears to be spent in preparation for filming, standing around waiting for takes or sitting in the canteen.
No comments:

The Autumn weather is starting to make its presence felt. Today's missions were abandoned with Rochester airfield underwater and an improvement is now unlikely until Friday.

Last week, we had a lucky break with a banner around Ipswich advertising "LISTEN TO TOWN 102 FM NOW ON AIR !" another radio station launch under bright blue skies but with very challenging and gusty conditions.

Over the next four months at least, flying any banner involves an element of probability and some luck, which is why the aircraft will go for a complete re-paint at the beginning of November for two weeks and will re-appear looking rather smart I hope.
No comments:

Front page news on 'Churchill Estates Review'. How an aerial banner can be good for business! 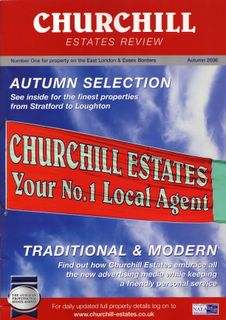