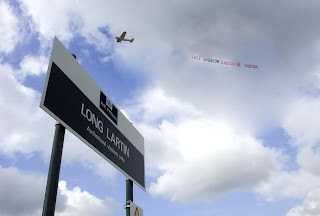 An unusual mission for Airads today, over Long Lartin prison in Worcestershire and organised by the supporters of Charles Bronson, with the message: “FREE BRONSON- ENOUGH IS ENOUGH”.

The group has issued the following statement:

“Charles Bronson has been imprisoned now for 35 years 30 of which have been in solitary confinement and despite 10 years good behaviour he has still not been released or de-categorized. Charlie's human rights have been constantly breached throughout the years and his next parole hearing is not until 2011 even though he is 8 years over his tariff.

Charles Bronson continues to support and donate to charities mainly to under privileged children and is a dear friend to all his supporters as such we hold protests regularly to gather signatures for his petition. 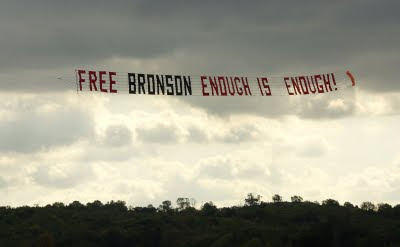 Charlie has no voice but we do!

Paedophiles and rapists are released back into the public regularly. A woman who kills her 2 teenage daughters gets 33 years imprisonment, Charlie is still in solitary confinement after 35 years and has never killed anybody. "

Anyone wishing to find out more information on Charles Bronson and his ongoing campaign can visit his website on http://www.bronsonloonyology.com/ and sign the online petition or attend the next protest on the 16th Oct 09 from 11am-6pm outside the Houses of Parliament, Central London.”
No comments: