Back again to celebrate the annual rally in memory of the Tolpuddle Martyrs, Airads was busy flying a Trade Union banner over the march which takes place in the small Dorset village of Tolpuddle to commemorate the men who were deported to Australia, over 150 years ago, for starting a small Trades Union. 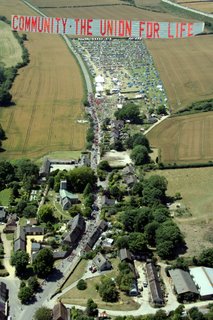 The six Tolpuddle Martyrs were all farm labourers, paid 9 shillings a week and lived in dreadful poverty. Their leader George Loveless, decided to set up a Union in Tolpuddle to give the labourers bargaining strength.

In 1834 James Frampton, a local landowner, wrote to the Prime Minister, Lord Melbourne, to complain about the union, invoking an obscure law from 1797 prohibiting people from swearing oaths to each other, which the Friendly Society had done. James Brine, James Hammett, George Loveless, George's brother James Loveless, George's brother in-law Thomas Standfield, and Thomas' son John Standfield were arrested, found guilty, and transported to Australia.