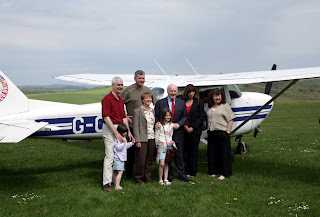 Here's a photograph from the last General Election, when Labour and John Reid joined Airads as we flew around the country. - It's the old aircraft.

The new aircraft G-CEKI, has now arrived at Southampton docks and will, with luck be flying in time for the beginning of June.

If you are planning on an aerial banner this summer, then book know, as the weekends are starting to fill.