Old Trafford and Everton in the News 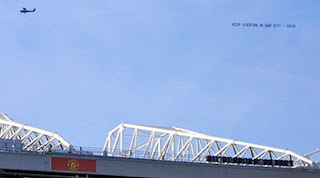 Lots of reporting today in the papers and on TV of yesterday's flight over old Trafford.

"Fans aiming to keep Everton in the city took their campaign to the skies of Manchester yesterday during the Premiership match between Everton and Man Utd at Old Trafford.

A protester flew a plane with a banner reading Keep Everton in Our City over the stadium. The stunt was part of the group’s on-going campaign to stop the club moving to a proposed new stadium in Kirkby.

Similar protests have taken place at home games, but this is the first at an away game."

"And five minutes after Ronaldo's opener, Wes Brown failed to cut out Pienaar's cross and Tim Cahill rose above Nemanja Vidic and Patrice Evra and, with the ball in the net beneath the Stretford End, dashed over to punch a corner flag. The light aircraft that had been patrolling the clear winter skies over Old Trafford carrying a banner protesting about Everton's move from Goodison to Kirkby was still swooping above the great arena. From the cockpit, they would have been pleased with what they saw."

Not sure we could see that clearly but more flights yet to come!