P&O Down the Line

I have been struggling with the P&O 175th anniversary extravaganza at Southampton. 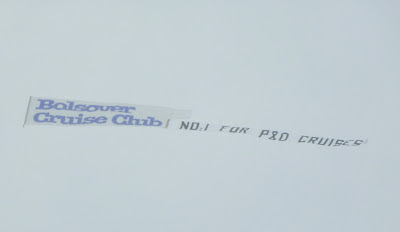 Over at the docks, the line of cruise ships, Oceana, Adonia, Azura, Oriana, Aurora, Arcadia and Ventura was certainly impressive, that's if you could actually see them in pretty awful conditions. The Red Arrows cancelled their display but I managed a single pass down the line before running for cover at Lee on Solent airfield. I'm reminded of the quip by Mel Gibson in the film, Air America: "Here at Air America, what's considered psychotic behavior anywhere else is company policy.."

The view down the line of great cruise ships was great but to be honest, you can see I was a little preoccupied with the bad weather that ambushed me when I got there.