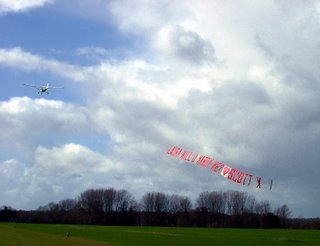 Another day and another spring romantic “pops” the question.

I didn’t think that today would be possible with a proposal to fly just outside Aldermaston. The weather conditions were very challenging with heavy cloudbursts and 40mph winds. However, the young man in question was desperate for us to try, having set-up a surprise party and bought the engagement ring and so with the wind howling along the runway at Basing Farm, Cupid or fortune were on his side, with the banner up at the first attempt; more luck than judgement.

Having done the quick flight and wrestled the aircraft back on to the ground in the rain, a coffee and two Vallium was followed by an excited call from the client. “She said ‘Yes’, he said, “As it was the only way she was going to get back inside out of the rain!”

If I had realised the boat race was on on the way home, I would have stopped off for a look. To give you an idea of the wind-speed out there, Farnborough to Herne Bay in forty minutes on the way home!