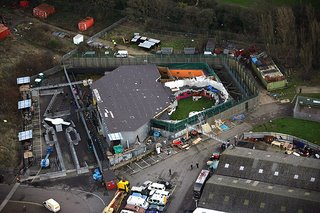 I never thought I would watch Big Brother, let alone play a minor role in the publicity. We've been sitting above the Big Brother house this afternoon in the Airads aircraft towing a banner saying "BB Bullies Out." Sky News appear to have mixed up their schedule and the Sky "copter" left short of fuel before we arrived but a constant loop has been running on Sky News and the BBC picked it up too.

Sky News reports that Jade saw the banner from the hot tub which explains her behaviour with Shilpa later in the day. Can't say that I noticed her though!

However, on Sunday Jade denied Big Brother producers warned her that she had become an international figure of hate and advised her to apologise to Shilpa. 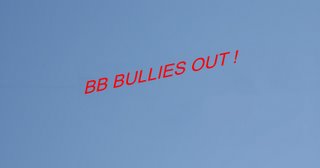 She said: "I wasn't briefed about what was going on outside. Big Brother can only be Big Brother - he's not allowed to tell you anything.

"But I knew a story had broken out because of the aircraft that were over the house. I said I thought it was something to do with me and Shilpa and the argument."

We were extremly lucky with the weather window at Denham, there should have been a howling gale blowing and there wasn't, although we did have our problems on the pick-up with a broken hook which forced us to run late.

A huge traffic jam along the M25 gave plenty of scope to display the message: "BB Bullies Out" on the way into Stapleford to drop the banner. From an advertising point of you I guess you can't buy the kind of coverage we saw today without spending a small fortune!

Strangely enough, another advertising agency called us with a request, in addition to The Sun newspaper. The former asked if we could drop a dummy Formula I car driven by a stuntman in a gorilla outfit, by helicopter into the Big Brother garden. You can imagine my reaction. Not possible in the nicest possible way... cheaper and easier to shoot the Gorilla I told the chap on the phone! Perhaps he did?