It All Works Out in the End for Lloyd and Charlotte

There are times, when the weather gets so bad, that you have to be a little creative in having a banner flown! 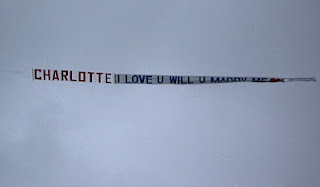 This afternoon, while spring-like sunshine covered parts of Kent, Rochester airport was bathed in fog, drizzle and the occasional dusting of snow for much of the day and nothing was moving on the runways. 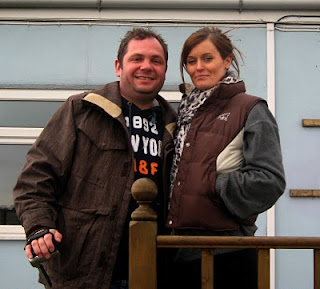 By lunchtime, it became clear that there was very little chance of lifting Lloyd's proposal to Charlotte over the cloud-locked hills towards Detling, only a few miles away and so I suggested that he drive her to Rochester airport, where at least I could have a try at picking-up the banner and working at low-level inside the airfield circuit.

Kelvin Carr, Rochester's operations manager, very kindly invited the couple into the control tower, while I quickly got off the ground to pick-up Lloyd's proposal. In the mixed drizzle and sleet, collecting the banner was nothing short of a miracle, given the poor horizontal visibility but fortune smiled on the couple and off it flew on the very first attempt. You can see how wet it was by the curl in the sodden banner,making it less than aerodynamic.

Airads would like to offer our congratulations to yet another happy couple on what has proved to be one of our busiest months for marriage proposals since before the recession began.