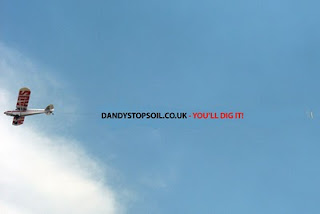 It is estimated that over 100,000 people saw Dandy's Top Soil's latest form of advertising, their 60ft Advertising Banner being towed 600mtrs high by a Plane.

The Plane, which was destined for Chester Racecourse, where 41,000 people where enjoying the City's Family Day while watching the world famous races, took off from Blackpool Airport at 1.30pm, flying down the Northwest coastline over St. Annes, Southport, Ormskirk, Liverpool, Widnes, Runcorn, Ellesmere Port and finally Chester itself arriving on the scene at around 2.00pm.

The Plane towed a 60ft advertising banner with the letters: DANDYSTOPSOIL.CO.UK behind it. After circling the City centre and Course for over an hour the plane then moved north to the World Famous Chester Zoo where thousands more visitors and tourists were enjoying the sites the Zoo had to offer.

After one final lap of the City Dandy's Advertising Plane headed north back over Warrington and Liverpool City Centres to it's final destination back at Blackpool Airport.

The total flight lasted two and a half hours and could not be missed by anyone who was outside and within 2 miles of the plane.

Adam Dandy commented "It was a great success! If they didn't know who Dandys Topsoil were, they do now!"

The Dandy's Banner Plane will be touring across other major UK Cities, Towns and high profile events over the next twelve months, increasing the National Topsoil Company's Brand Awareness

I saw this plane! Great idea for advertising, well done!