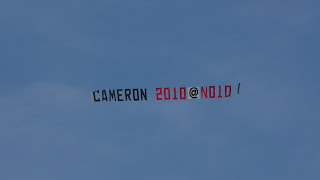 A surprise for David Cameron, with a banner message: 'CAMERON 2010@No10' this morning at Grays in Essex!

There was a large reception committee in evidence in the playing field behind the school or college below, with TV outside broadcast vans with satellite dishes on their roofs, parked-up outside. On teh way back to the airfield I passed a very smart looking Agusta helicopter, en route to Grays,, I asusme to pick him up for his next appointment.

I've some photos in my camera and will try and put one up later, as I'm typing this between jobs at the airfield.

Next-up is the pop concert the afternoon at Camber Sands, with a rather different message and one that to be honest ,as a simple pilot I'm too old to understand: "WHEN HARD CREW RULED THE WORLD."

Now, if only someone would tell us what Gordon Brown's schedule is, we could have a special election message flown for him too!