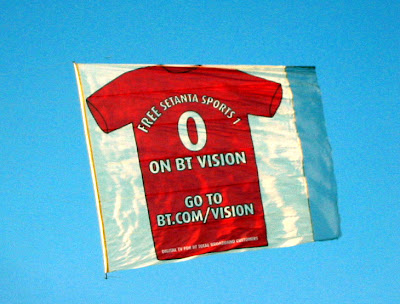 As if by a miracle, a day of good weather and that allowed us to fly the BT Vision and Setanta Sports football shirts banners over Manchester United vs Liverpool, Manchester City vs Chelsea and Blackburn Rovers vs Arsenal, as well as sneak in a marriage proposal over Southend pier as well.

Tomorrow, it's over to the Lakeside shopping centre for another proposal and next week its more football matches, involving West Bromwich, Chelsea, Tottenham and Manchester United.

Meanwhile, we have to frantically move the banners around between aircraft and pilots, rather like a bizarre game of musical chairs with the added excitement of not knowing whether UPS will either lose them or forget to pick them up.