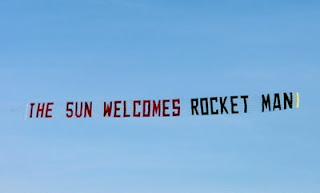 Airads and The Sun Newspaper were the first to welcome pilot Yves Rossy today as he became the first person to fly between France and England on Friday with a jetpack strapped to his back.

The simple kerosene-burning jet turbines propelled him the 22 miles between Calais and Dover at speeds of up to 120 mph. The journey took just under 10 minutes. 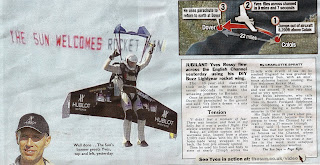 The 49-year-old Rossy, who calls himself "Fusion Man," ignited the jets inside a plane before jumping out more than 8,000 feet above ground.

After a period of free fall he opened the wing and soared across the water. With no steering controls, the only way to change direction was like a bird, moving his head and back.

When he reached Dover, he released his parachute and drifted down gently before landing in a field with The Sun newspaper's welcome right behind him.

Rossy traced the route of French aviator Louis Bleriot, who became the first person to fly across the Channel in an aircraft in 1909.

It was absolute mayhem above the landing site, with unauthorised French pilots accompanying the Jet Man, not talking to air traffic control and presenting a real hazard to the camera helicopters and the banner aircraft.